As for my own Bingo card – here is how I fared: 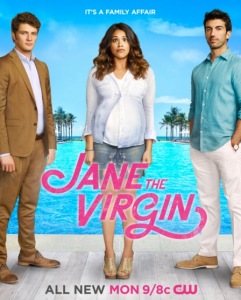 I absolutely adore Jane the Virgin. It is currently my favourite show ever. It is like a mash up between Days of Our Lives, Harlequin Presents/Sexy Mills & Boon and Arrested Development. What has this got to do with reading, I hear you ask? Well, my sons are also obsessed with the show and my sons watch everything on TV with closed captions turned on. Everything! It drives me batty! But it does mean I read all my viewing. I have also become somewhat obsessed with every news article and interview I can find on Jane the Virgin’s writer Jennie Snyder Urman. I find it unbelievable that she did not grow up watching soaps and telenovelas as she has hit every single bell that as a watcher I enjoy. I am totally in love with Rafael in the show. He is the ultimate Harlequin Presents Lynne Graham gazillionaire. He’s hot, he’s suave and he wears faded salmon oh-so-well. Swoon with me people! Swoon! 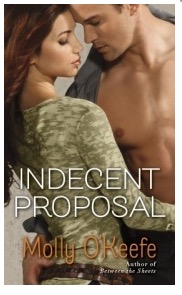 Bingo Square: Family disunion (I could have picked soooo many squares for this book but the rule is 1 per book!)

I’ve had soooo many twitter and blogging friends raving about Molly O’Keefe that I finally pulled my finger out and bought one of her books and OMG!!! Her writing was just FABULOUS! Everything that I love about Mills & Boon category romances is what Molly O’Keefe has brought to her (longer) novel. An intense, deep exploration of every movement and personal thought that brings two people together. Ryan Kaminski (yep – female) and Harrison Montgomery connect over the bar where Ryan works. They have a no names one-night stand with a faulty condom. when Ryan finds herself unwell and unemployed her brother steps in to take care of her at which moment politician Harrison appears on TV and some dots are joined. Harrison, to avoid a political scandal during an election ties Ryan into a marriage of convenience. As much as their pre-nup keeps them from revealing themselves to each other, their spark and empathy that drew them to each other takes charge and you watch two very lonely people slowly come together. Both Ryan and Harrison have deeply problematic relationships with their families but these problems are the very things that draw them closer to each other as they seem to understand their needs. I also love that in their marriage of convenience they decide that they can’t lie to each other if they are to appear united to the media. I liked that even their respective dysfunctional families were not completely demonised but instead showed that even those people who appear to have ethically ambiguous behaviour can still be shown in a sympathetic manner. 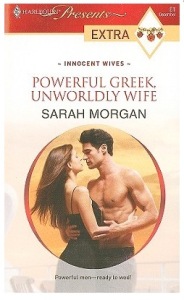 Bingo Squares: Or so s/he thought

I hate this phrase and any variation of it. If I see it in a blurb the book gets dropped. If it appears anywhere in the first chapter of a book, it gets a big old DNF for me (yes – I am looking at you 13th line in Hunger Games). But occasionally, a “So s/he thought” is surprised sneaked far into the book and I shake my fist to the novel writing gods and cry “Whyyyyyyyyyyy!”. Sadly, I was hit with a surprise “Or so she thought” in Sarah Morgan’s Powerful Greek, Unworldly Wife. I loved the opening to the book where the hero is about to take a date to bed just to find his (estranged) wife lying in it. Though the story flowed, it did not enthuse me at all.

The Legend of Lyon Redmond

Ugggh! You can reread my ditty rant here.

Bingo Square: It’s all Greek to me:

I go to OPA-cize every Monday. It is just like Zumba but with Greek music and I love it. It’s full of women (and 3 men) of all ages and sizes doing Greek dance routines to the music that just fills my heart. My sisters and I have taken to downloading the music that they use and listening/reading the lyrics that accompany them. My high rotation song is all about a guy who “sinned” by going off with another woman. He is excusing his behaviour and begging forgiveness by saying “I may have been kissing her baby but I was thinking of you while I was doing it”. Classy bloke!

I own my own copy of Molly O’Keefe’s novel. I borrowed both the Sarah Morgan and Julie Anne Long novels from a public library in NSW.

Shallowreader acknowledges the Gadigal People of the Eora Nation on whose ancestral lands this blog is written. We would also like to pay respect to the Elders both past and present, acknowledging them as the traditional custodians of knowledge for these lands.

© Vassiliki Veros and ShallowReader, 2012-2019 Unauthorized use and/or duplication of this material without express and written permission from this blog’s author and/or owner is strictly prohibited. Excerpts and links may be used, provided that full and clear credit is given to Vassiliki Veros and ShallowReader with appropriate and specific direction to the original content.