So I’m back on ABC702 Linda Mottram‘s show tomorrow. It looks like this will be a semi-regular gig (once or twice a month). For the most part, I will be using the ReadWatchPlay monthly themes for the reading I will review on her show. Which is fab fab fab for tomorrow because February is SmoochRead!

We are talking love!

We are talking Swoon!

We are talking Mills & Boon! (wellll….not really. Not this time. It did rhyme though)

Colour Me Swoon: The heartthrob activity book for good colour-inners, as well as beginners 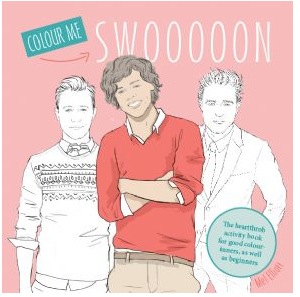 How does one go past a colouring book of hearthrobs. The blurb reads

Hotties, hunks, heartthrobs, beefcakes, dreamboats, studs. It doesn’t matter what you call them, all that counts is that they make you go weak at the knees. But what are the chances of you getting up close and personal with David Beckham, Jake Gyllenhaal or Nicholas Hoult? Well here is the next best thing…

Colour me Swoooon allows you to caress the chiselled features of 60 of your favourite pieces of macho eye candy. From Aaron Paul to Zac Efron, all the guys are here and can’t wait for you to come and give them a damn good colouring in!

Line drawings are accompanied with trivia, crosswords, find-a-words and quizzes reminiscent of teen mags such as Tiger Beat and 16 and actually has a special 80’s Heartthrob section – swoon that Tom Selleck Mo! and Karocky kid bandana! A Quirky Hot team with Michael Cera and Chris O’Dowd and original swoonies Paul Newman and Steve McQueen. The book starts with Ryan Gosling (or course!) and includes squueeee worthy boy bands and other celebrities. I would have preferred a Tudors or Superman Henry Cavill (is that a blazer he is wearing?) but all the faves are in here. I’ll be starting with Patrick Dempsey. Mel Elliott’s book is perfect for doodling in during your metaphysical poetry lectures though perhaps too obvious for your weekly staff meetings. Mel Elliott has a number of books including Colour Me Good Ginger and the David Bowie Paper Doll. Colour Me Swooon is well worth cracking open my 96 Derwents.

PS For those of you who are offended by beefcake – Mel Elliott is all for equal opportunity objectification. Her new Colour Me Girl Crush is out in April. I can’t wait! I dibs colouring Salma Hayek first 😉

A Woman Entangled by Cecilia Grant

A Woman Entangled by Cecilia Grant

Back in 2012, I listed Cecilia Grant’s A Lady Awakened as one of my favourite romances of the year. I have since read A Gentleman Undone which I enjoyed and A Woman Entangled has waited on my TBR for nearly a year. The third in a series about the Blackshear family, this story was very much a yearning book for me. Here were two protagonists who yearn for respectability, upward mobility and acceptance from social circles they were not welcomed into, not due to any of their actions but through their family connections and the choices from their own family members. Usually in romances, couples are shown in overcoming biases, class barriers and other problems. We cheer for the hero and heroine and even though we know that there are obstacles in their future together we mostly know that they will triumph due to their love for each other. However, this novel is about the impact of such love matches on their families.

Nick Blackshear has been ousted from the ton due to his brother marrying a cyprian. Families do not want their daughters and wives to have contact with such a family and Nick’s prospects to enter parliament as well as his practice as a barrister has been affected. Kate Westbrook is the daughter of a similar love story, her titled father married her actress mother and has not been in contact with his family for over 23 years – a family that Kate is desperate to be part of as she wants riches, and barons and titles. Kate is narcissistic and I disliked her implicit feelings of shame for her mother, who she proclaims she loves yet I did not see this in her character. She has idealised the Ton in much the way people today may idealise celebrities. At one stage Kate thinks to herself that “She’d been a friend of gossamer substance…” and that “she was a shallow creature capable of wanting only things that were beyond her reach”. She certainly is a character of gossamer substance and she is shallow, more concerned with looks and class than of friendships and love at first. It is lovely to see her slowly realise that these were immaterial to her happiness, to her sisters’ happiness and her friends that do accept her and that she could be happy without the need for titles.

Nick himself struggles with how people view him in relation to his brother’s marriage. Nick and Kate have had a friendship for over 3 years but this book focuses on the handful of weeks from the moment that Nick declares that he has never felt brotherly toward Kate but as they are both tainted with relatives that have brought shame to their names they needed to focus on marrying well. Marrying above their station and not for love.

Even a man with honorable intentions…Even a lady whose ambitions depend upon her virtue…Even two people who are no more than friends by daylight can fall prey to the influence of a secret dark room.

I love Grant’s complex characterisations, and the depth and knowledge that she pours into her world build. I thoroughly enjoyed her description of Nick’s work as a barrister and as I read her descriptions of the Old Bailey I discovered the Old Bailey online digital history project tweeting and tumblring out similar stories as in my novel. (this made for great cross purpose reading). I enjoyed watching these two characters realise their genuine affection for each other was love and that they learnt that there are people in society that will accept them for who they are and not who their family members are. I loved the sexual tension that built slowly through the book however I was disappointed that both Nick and Kate do have sex before they are wed. This felt unlike the two characters for me. I could have believed that they got carried away in a moment of lust but there was too much consenting for two people who were so hung up on doing the right thing, or more to the point, being seen to be doing the right thing by societal standards. I would have loved for these two to not have consummated until their betrothal (and perhaps shocking Romance readers by not having sex at all). This was the only thing that really didn’t sit well with me but overall I really enjoyed this book. Cecilia Grant’s writing is beautiful and lyrical and I was once again pulled into her narrative world. I will look forward to her next book (and I really hope it is Viola’s story).

5 thoughts on “Swoooooooning and entangling”