One of my favourite romance tropes is the old love rekindled. You know the one – they couldn’t get along, they were too young when they first got together, they somehow betrayed each other, they went separate ways…yet they find love many years later.

A fortnight ago, after months of squeeeing and anticipating, I went and saw The Veronica Mars movie. My take away is this: 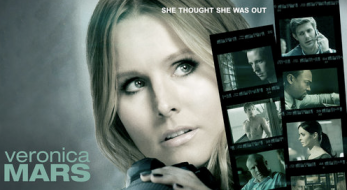 2. I’m glad they went for 9 years with no contact. I really loved that Logan and Veronica broke up at the end of season 3. It was too soon for them to be together. They were still teens who had gone through too much crap.

3. I’m glad that Logan joined the Navy. Though he looked odd in the uniform he obviously found peace through the discipline of the armed forces. He was a teenager hell bent on self destruction. It sure beats they hell out of Logan finding peace with a Yogi or scented candles.

4. Though Logan was much more settled, more responsible but despite his control the vision of Veronica’s sex tape was still enough for him to lose his temper.

5. Kristen bell ripping open Logan’s shirt. Growwwwwwwl! And the rest of that scene. The way that man kisses! And then they are at it, standing up…against the wall! Well, hello Mr Strong Thighs!

6. The reprisal of  the Epic speech! OMG! I loved that it was brought out again. In Season 2 the day after he says the speech Logan claims that he was too drunk to remember the night before. IT WAS 9 YEARS LATER AND HE REMEMBERED. DAMMIT! HE REMEMBERED. He had bullshitted and I am happy to think that he held back from Veronica when they got back together as teens as he always must have known it was not their time.

7. Dick Casablancas is still funny and still sad and pulls at my heartstrings. His matter-of-fact mention that he is a medicinal user of marijuana user flags that he is still dealing with his own devastating losses and his complicit involvement.

8. The mystery was great. The beefcake was awesome.

9. Leo D’amato YAY! (Is this due to my New Girl Schmidt crush? Who knows?  Who cares? The banter was great).

11. Mac and Wallace YAY! Though I really wish there had been a stoush between Mac and Madison St Clair. As changellings I wish that story line was brought to the fore again.

12. I don’t think it was necessary to bring Piz into the movie. Piz did not move the plot forward at all. If anything it weighted the story down. Any boyfriend would have done the job.

13. The snark was still there. Loved the snark. Rob Thomas and Dianne Ruggiero – you are dialogue Gods!

14. I like the fact that Logan had to go and that 180 days won’t keep these two apart – though in my head he dies while on this tour. There is no HEA in noir.

Now, as I am wont to do I also have imagined Logan and Veronica on the When Harry Met Sally chair…

Veronica: “The first time we met I was roller skating”

Logan: “You were. You were very cute but I was going out with your best friend”

Veronica: “Who was murdered”

Veronica: “Yeah….. That was awkward. But we both know that you are more like your mum.”

Logan: “So then I hated Veronica”

Veronica: “And I hated you”

(Logan & Veronica’s shoulders lean harder against each other)

Logan: “She was constantly snarky. She was funny and didn’t pull any punches. Even though I hated her she was the only person that was not afraid to talk back at me”.

Veronica: “We finally got with each other but then we broke up as I got with my ex-boyfriend who was his best friend”

Logan: “Which sucked. I liked my best friend. I was fine losing a girlfriend…”

Veronica: “But then we got together again.”

Veronica: “And a bit more blood. There may also have been an explosion and some trauma. But we had a short time that we were happy”

Logan: “But then we broke up again”

Veronica: “And then Logan belted the shit out of my boyfriend and another student and I got caught breaking and entering and it was time to leave Neptune. We both left but not together”

Logan: “No. We weren’t together for 9 years”

(silence as the two stare into each others eyes with sadness)

Logan: “So anyway, I seem to have some bad karma and my girlfriend gets murdered nearly 10 years to the day that my former girlfriend died. I called Veronica because I knew I would help me. Few people trust me even though I have worked hard to get rid of my bad boy reputation”

Veronica: *snorts* “Yeah. Some bad boy. You’re a marshmallow. Logan calls me, and I thought it was a knock over case. I popped over from New York to help him. And when I saw him in his uniform I swooned but deep down inside  I am dying to call my boyfriend – yes the same one he beat up years ago – and break up. There on the spot. I’m very black and white on the fidelity issue.” (Logan nods with just a touch of fear in his eyes)

Veronica: “We went to the reunion”

Logan: “There was a fist fight”

Veronica: “I broke up with my boyfriend”

Logan: “There were car crashes”

Veronica: “And lots of long drives”

Veronica: “And it all came together. It just felt right”

Veronica: “It took us only 4 days”

I loved this movie. I loved the vibe in the packed out theatre (lucky me – I spent hours refreshing my movie tix screen and managed to buy tickets for the opening night) with the audience cheering and applauding favourite moments. It is a rare day that a cancelled TV series has the opportunity to bring closure to characters so many fans love. I am glad that, though Veronica and Logan got closure, the story was left open ended. Veronica is addicted to the underbelly of life. And I am looking forward to the books.

PS I cannot promise that this is my last Veronica Mars post. I am an addict.

6 thoughts on “Reasons I love the Veronica Mars movie (with a bonus Logan!Harry met Veronica!Sally scene)”