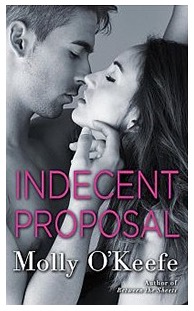 Ryan and Harrison meet at the bar that Ryan works at. They hook-up that night and have heart-speeding and mind-blowing good sex. However, this is a case of no names, no phone numbers, no details so that they each go their own way with no chance of meeting again. Despite having used a condom, Ryan finds herself pregnant (and unemployed as her boss fires her as he takes issue with her sleeping with a patron of the bar). Her older brother, the only member of her family from whom she is not estranged, discovers the identity of her lover at the same time she does, as they are watching the news together when they find out that Harrison was a politician. In his big brother way and against Ryan’s wishes, he goes and insists that Harrison acknowledges Ryan to make sure she isn’t left in a tenuous position. What comes about is an awkward marriage purely to ensure that Harrison did not have to deal with a sex scandal during an election year. Harrison though is mired in scandal. He has a dodgy father whom he can’t abide, he is hiding his own secrets from a youth not misspent but misdirected in his first relationship. Ryan too is estranged from her family as her abusive ex-husband had stolen all of her father’s savings resulting in a six year exile. Ryan strikes upon a pre-nup with Harrison asking for her father’s mortgage to be paid off and in return she plays the supporting and loving politician’s wife. Loving in the public sphere yet separate in their private lives. But these two had an incredible connection right from the beginning of the book. One which after the initial tension of a forced marriage saw them blurring their public/private lives. Ryan and Harrison like each other. They understand each other and what they eventually discover is that the reason they worked so well in their public appearances is that it was the only place they could drop their pretense. The two turn to each other not only for sex but for comfort and affection, Ryan offering Harrison a hug as he is trying to deal with his own difficult days.

I liked this book. I liked the way that O’Keefe had each of these characters supporting each other. Each of their families were in equal parts dysfunctional and loving (if you could call Harrison’s tigress-defending-her-cubs mother loving). I love that O’Keefe managed to not demonise their dysfunctionality but shows that people are complex. Just because someone has crossed a societal “moral” line, does not make them a bad person and we see this with Harrison’s father Ted. At the same time, we see Ryan, who having been torn to shreds by Harrison rushes to her family home – a sign that if going to a place that has shunned her for 6 years is better than the reality of staying with him then their marriage was really going a bad way. Ryan has an awkward reconciliation with her family for how can she move forward with the father that she loves but who had not reached out to her during the six difficult years alone. Harrison though can’t live without Ryan for more than a day and he chases her down to convince her to stay with him.

Like Miss Bates (read her AMAZING review here), I got caught up in my reading of this book during a sleepless night. The humidity awakened me but Ryan and Harrison’s quandry kept me from falling back to sleep. So with my brand new night light, I read from 3am to 6am caught up in the emotions of this book. I shed a tear or two for Ryan who seemed rejected from all with whom she wanted to have a connection and my heart went out to Harrison who had the outward signs of success but was isolated and alone in his internal life until Ryan came along and connected with him. This book was all very emotional for me. It was intense and I highly recommend this complex and fabulous book.

I purchased my own copy of this book from an overseas online book vendor.