It is the penultimate bingo call for this year and we have a DRAW! WOOOOOT! Call outs to both Valancy and Willaful!

As for my reading. I too hit a few squares and rather happily, I also accidentally read some Christmas books! How fortuitous:

My sister is a big BIG Amy Andrews Medical Romances fan. I too love Amy Andrews’ books but I hadn’t tried her medicals so when she handed this one over to me I was in a “must read” mode and I was not disappointed. We had a older (40) male ER nurse and a much younger ER nearly Doctor both at a scene of an accident. The ER Doc throws up (yeah – a vomit book!!!! EXTRA COOKIES FOR AMY!) after treating the injured person while nurse dude holds back her hair (total swoooooon!) and despite her throwing up in front of a stranger she still can see that he is a hot hot man and is tempted by him but there was vomit. Surprise the next week when Doctor Vom (I say this with thedeepest affection for a pretty cool female character) rocks up to work to find that he is working ER alongside with her. I really liked these two together. The May-December aspect was OKish but I think that Nurse Dude might just get totally annoyed with Doctor Vom still not having completed all her studies yet and having parent issues. He’s a total adult – widowed, ex-Army, Dad to an adult etc whereas Doc Vom is still making her way. As a book though – loved it!

My sister gave me this book.

Sleigh Bells in the Snow by Sarah Morgan

The heroine in this book is so hard core corporate she even suits up for Christmas. So instead of going on holidays for the festive season she takes on what she thinks is an easy job to help market the hero’s family business just so she can get out of New York during the Christmas holidays. Big mistake because corporate suits and heels don’t really work well in snowbound Vermont. It takes a while for the heroine to get out of her suit and into a comfy thermal parka full piece. I adored, just adored the description of Vermont but I can absolutely tell you that I have zero like nada like nil interest in ever being in a cold forbidden place where it is regularly under 0 celsius. LIKE NEVER. My parents did not leave their snowed in villages in Greece for hot and never snows Sydney because living in snow for 6 months is funsies. My deep dislike for snow beyond a one week winter wonderland aside, I love Morgan’s writing and I really liked this book.

I have a second hand copy of this book that was given to me. 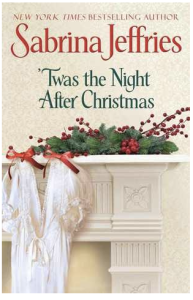 ‘Twas the Night After Christmas by Sabrina Jeffries

I listened to this novel on audiobook over 6 weeks while driving (yeah – I don’t drive on my own much). I’ve decided that Michael Page as a narrator is not for me (this is the second audiobook of his I have listened to) – so much so that within a few chapters I reserved the print book but unfortunately it didn’t come in until the last 6 chapters (and then I read that baby in a flash!). Page has a way of characterising men as gruff mumblers and the women with high sycophantic voices and I cannot bear to listen to the characters. However, the narrative is fine and I can listen past his ugghh! characterisation and I really enjoyed this story. The hero is all cold and sharp but goodness my heart went out to him. He is abandoned as an 8 year old by his parents, his mother and father sending him to school and then never spending any holidays with him ever again. As a young adult he has a run in with his parents which hardens him and he holds them in contempt. We meet him as a 31 year old who has received a summons that his mother is dying from her companion. He rushes to see her but she is quite healthy. But of course, there is the companion whom he falls in love with. The hero was not a cold man at all but a hurt yet quietly stoic man trying to understand how his mother who used to dote on him could reject him so suddenly and for so many years. Slowly, slowly he discovers the truth and Christmas bring forgiveness and love to all and I just have to say that this was such a heartfelt story. All about the hero. Who was also an asthmatic. And the heroine only serves to drive his story with his mother. ‘Twas good. 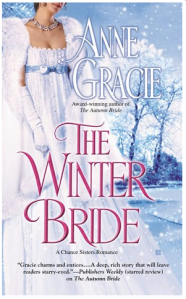 The Winter Bride by Anne Gracie

Goodness me! Hero Freddy Monkton-Coombes is a total flirt. He’s flippant and flirty and fun. But as Damaris gets to know him better and better she sees that beneath his fun Freddy persona he is rather sad and hurt – once again due to distant parents. My only complaint with this book is that, having read it back-to-back with the Autumn Bride there were some Freddy and family inconsistencies. But I will ignore them. I did like Damaris Chance muchly too. 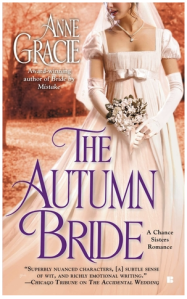 The Autumn Bride by Anne Gracie

The first of the four Chance sister books, the heroine suddenly finds herself saving her sister and two other women from a life in a brothel. They hide out in a deserted house and Abigail goes out to find/steal for food when she finds an old lady dying due to being malnourished. She and her sisters march into her home the next day, pretend they are her nieces and fire her greedy thieving staff and help out the old lady. Together the five women create a smoke screen which most people don’t see through however when her hero/nephew turns up he is determined to work out why these strangers are pretending to be his relatives. And then he falls in love. Quite an excellent book.

For reasons of total transparency I cannot review these three books because Rachel is a good friend (of the sleepover in our jimmyjams watching Jane Austen adaptations kind) however these 3 brothers are flower moguls. Yep! FLOWERS! They grew their family flower farm into a big company and there are lots of flowers in ever story. When Bookthingo gave me Flower Boys as one of her winning squares from last month I really had no idea how anyone could find a book that matched that square so I was rather excited to find these ones! I personally liked every novel but, as I said, I am big time biased.

Obviously the author gave me my copies of these books.

Bingo Square: Moving toward the light

Yeah. There be ghosts and death in this here novel.

Infidelity all over the place. Like count the ways. Totally has a status of “It’s complicated”!