Lately, I have been whining a bit about being in a reading slump but in actual fact, I am only in a novel/fiction reading slump. The rest of my reading is pretty much buoyant and happening. So much so that I’m hitting those Bingo Squares for March. I could have doubled up on some of the squares but I have gone with only one square per reading. And I still fail at my own game as I can’t seem to score a straight run, dammit! 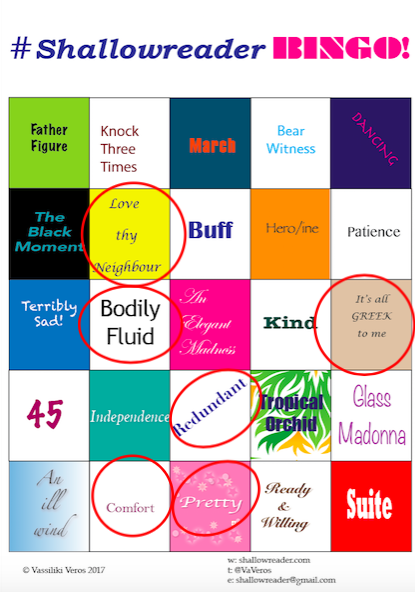 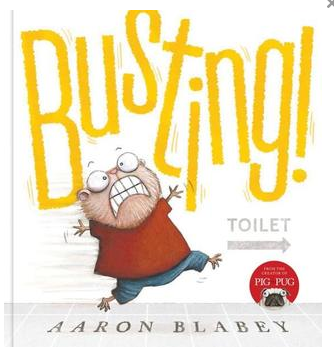 I would argue that Aaron Blabey is in the top five Australian picture book authors evah! And his latest book Busting is a very funny, verse book about holding your wee in and bladder control.

Lou is BUSTING for the loo.
But the loo has quite a queue.
So what on earth is Lou to do?

This is an excellent book not only for kids who are being toilet trained but for anyone who enjoys the occasional toilet humour or struggles to find a toilet alternative.

I read about Reverend Bill Crews fight to be erect a statue “In memory of the history of suffering endured by the young girls and women known as ‘comfort women’ who were forced into sexual slavery by the military of the government of imperial Japan…”. Since his decision to house the memorial statue, Rev Crews has been targeted by groups who deny that this trafficking ever occurred (similar to being Holocaust deniers).

Reverend Crews is a local legend in my ‘burb and his church is only a short walk from my home (though I have never attended a service there). I can only admire his determination to not be intimidated by the various groups who are using Australia’s Racial Discrimination laws (especially the contentious and thankfully defeated last week 18C) in order to suppress the erection of the statue. These groups are stating that it would incite hatred towards their families if people knew of the actions of their country’s wartime (WWII) actions.

Early in March I attended a seminar on Racism, Media and the Right held at my university. Professor Kevin Dunn from Western Sydney University presented his nationwide research on Australians and racism, there were discussions on political racism, the everyday minutiae racism to the (terrifying) dark web of the far right to cultural institutions opaquing diverse voices in their digital curations. This seminar was sobering in its discussions of racism and the forces we are fighting. There was some limited tweeting of the seminar available here, and much of the discussion also focused on the upcoming (and thankfully now defeated) Senate proposal for the watering down of the Racial Discrimination Act’s 18C which protects people from being racially vilified in public. That there were politicians who felt that the boundaries for public engagement were too strict and that people should be allowed to racially target people is reprehensible. As someone who was brought up to be a swinging voter and to not be politically aligned to any one party, I am disgusted by the Australian Liberal Party’s support of these changes. This party will need to make some deep, fundamental core value changes before I could ever consider swinging my vote to them. Incorporating human dignity into your party edict should not be a difficult task. Just use the UN’s Declaration of Human Rights as a guideline.

I am increasing shitted off at news articles that point to ebooks and ereading plateauing and the celebration of a perceived “print has won” reading competition. Every time I come across one of those infuriating articles (no – I am not going to link to them, I refuse to give them click links) I want to shout at the writers and celebrators.

What on earth are they cheering for? Do they realise that ebooks and ereading has liberated so many people who are unable to access print books? I know of readers whose arthritis has crippled their hands to the point that they cannot turn a page of a book (let alone carry the weight of a hefty book especially if they also need large print) and they are now able to read at ease. I know of people who can choose the font and size and reading flow that best suits their needs. I know housebound readers who used to be dependent on their family or on the local library’s monthly book delivery for their reading needs who now are at liberty to choose their own reading. They have reading agency and yet gatekeepers are guffawing like idiots at the market corrections. Only freakin’ luddites celebrate a market ebb as a win. Ebbs happen folks. After spikes, they go up and down until they find their equilibrium. Not only that, BUT THIS ISN’T a bloody competition. Reading and literacy should be available to everyone, not only to people who can access a physical object.

So I revisited an essay in Nautilus magazine on the Deep Space of Digital Reading from last year as it validates how people are ereading. There are many links within the essay that take you down the reading research rabbit warren that further supports that digital reading is good.

It’s all Greek to me

I spent most of March listening to Morna D. Hooker’s Paul (narrated by Paul English) – it is a biography and an analysis of St Paul’s theology from a female perspective. I read this to get an understanding of the tools of information dissemination that St Paul had at his disposal and which ones he used to spread the Christian word. I also read it as a nostalgic need to connect with my late dad and uncle (this too is a reading need!).

As a child, I clearly remember my father’s excitement upon attaining a bilingual, leather-bound copy of St Paul’s teachings and the subsequent visits with his best friend (who we called Uncle) Vic where the two of them would discuss the Pauline traditions. I loved sitting and listening to the two of them discussing this book (though my dad would shoo me away if I even tried to intercept their conversation). In the past year, I have needed to sort through both my late father’s and uncle’s books. And when I saw their respective copies still sitting on their shelves I thought I would find out a bit more about St Paul. I chose to not read their copies but to seek out a more modern interpretation of St Paul.

So what is my takeaway? Ultimately, Paul changed the course of history due to being highly literate – he was a polyglot, he had a classical education, one which was both religious and based on philosophy. And he knew how to read and write – the tools with which to communicate. His work can be interpreted in many ways, but the underlying message is that literacy is an enabler.

This audiobook was dry but infinitely listenable. My usual issue of spending very little time behind the wheel of my car is the only reason I did not finish the audiobook as I downloaded it from the library and chose to not renew it after my 28 day loan. 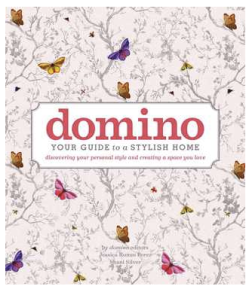 I continue to borrow pretty interior decorating books. Domino from the Domino Magazine editors is an aesthetic pleasure to read and it was all floral and pretty and gorgeous and if I had all the money in the world I would decorate all of my twenty, thirty, forty homes around the world using ideas from this book.

But I am far from rich, I might one day buy the book but for now I will settle for the occasional loan.

To add to all this, I have been reading lots and lots and lots on Digital Literacies as this is the subject I am teaching this year.

So much to read!

So little time to link to everything!

4 thoughts on “March 2017 ShallowreaderBingo write up”

Shallowreader acknowledges the Gadigal People of the Eora Nation on whose ancestral lands this blog is written. We would also like to pay respect to the Elders both past, present and emerging acknowledging them as the traditional custodians of knowledge for these unceded lands.

© Vassiliki Veros and ShallowReader, 2012-2021 Unauthorized use and/or duplication of this material without express and written permission from this blog’s author and/or owner is strictly prohibited. Excerpts and links may be used, provided that full and clear credit is given to Vassiliki Veros and ShallowReader with appropriate and specific direction to the original content.