So I have been trying to read a book called Tribal Law whose heroine is named Vassiliki Verity. I am not on an ego trip when I claim that this character is named for me. She is. I know this because I was told by both the author and Kat Mayo of Bookthingo. 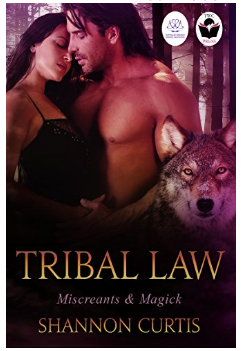 So here is the story: Tribal Law is a crowdsourced story. Author Shannon B Curtis (full disclosure: Shannon and I have twittered together, supped together and presented on a panel at a library event together so are on pretty friendly terms) wrote a story whose plot and main characters were given to her by members of the Australian Romance Readers Association (another full disclosure: I am not a member of ARRA though I have attended all their conventions to date). There was a big meeting, I was told it was rather raucous and fun and I was also told that Kat Mayo – friend, borrower and romance reading mastermind – insisted that the heroine be named for me. Because she loves me. Or should that be loves torturing me.

I am up to Chapter 7 of this book and though it is well-written, interesting and funny I just cannot continue (at least at this point) because  of the heroine being called Vassiliki and there are sex scenes and I just can’t stay in the story because I keep seeing my own name and I have no idea how all you “normal” named people can cope with reading books where you constantly see your own names.

Especially when I see the phrases such as “Vassiliki is a vamp” before my eyes.

I purchased my own copy of Tribal Law.

PS This book has a hatchback driving hero. I will return to read it just for this one reason!