It’s the end of August and for the THIRD time this year, Willaful from A Willful Woman has won the Bingo call! Woooooot! There was some fierce competition this month so a big congrats to all who have played and to a whole lot of new players this month too! Yay to more Bingo players! For a few tasters Valancy and Keira Soleore already have awesome reading wrap ups for this month.

As for my own Bingo! reading this month…..

OK OK. So my “Cool Bananas” square was a little unfair to the international contingent playing along but I could not resist putting it in. For the non-Aussies and non-The Bachelor viewers, this year’s The Bachelor contestant Richie Strahan is a man-dude-blondie-guy-sweetheartfromnextdoor-Beta-hero that women across Australia fell in love with last year when he was a contestant (and third runner up) on The Bachelorette. Our introduction to him was this completely awkward conversation where he nervously said “Cool Bananas”. Sadly, this gorgeous loveliness that we all fell in love with should have just stayed as a contestant that charmed us because as the leading man he lacks the performer nous and substance that is needed for a Reality Show (which most often is diametrically opposite to the substance that he most probably has a real human being). Richie is all awks, has managed to eliminate all the non-blondes (I think he is looking for a reflection of himself) and sadly, has bored me. It is a bit like when an awesome secondary character gets their own book when really all they had to say was already said in the first book. For a great breakdown (and in the vein of actually having read something rather than only watched something) on all things The Bachelor, love, courtship and scholarly meanderings – read Jodi McAlister’s recaps over at BookThingo. 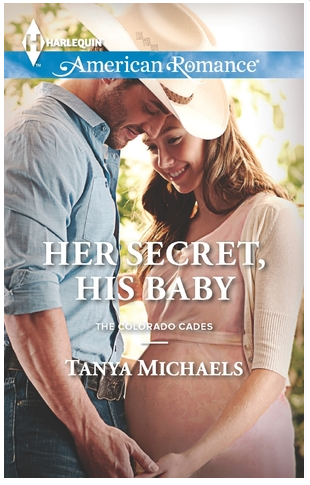 Her Secret, His Baby by Tanya Michaels

So Cowboy Garrett Frost and photographer Arden Cade have a one-night stand and despite using condoms Arden falls pregnant. This hook up was out of the ordinary for Arden as she was grieving on the first birthday of her A+ Bestie who had passed away only months earlier. Arden decides early on in her pregnancy to not contact Garrett even though she has the ability to do so and plans to bring her baby up without the father. I do love a secret baby plot and in the case of this book, Garrett discovering a 6 month pregnant Arden the secret baby is the obstacle to their love. Garrett finds it difficult to overcome the fact that her plan was to keep him from knowing he would be a father and never meeting his baby. I really liked Arden’s thoughtful ways of dealing with her brothers, especially when they go all big brother macho men when they finally meet Garrett-the-one-night-stand-dude and her way of challenging them on the double standard of their own hook ups. This book was well-written and quite lovely but it lacked the emotional punch I like from my romance reading.

I borrowed a copy of this book from a public library in New South Wales. 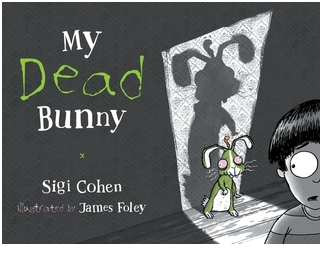 My Dead Bunny by Sigi Cohen and James Foley

My dead bunny’s name is Brad;
his odour is extremely bad.
He visits me when I’m in bed,
but Bradley wasn’t always dead …

This has got to be the most messed up yet oddly comforting kids picture book I have ever read. It is FABULOUS! Written in verse, there is death, there is a bunny and it is a zombie.

I borrowed a copy of this book from a public library in New South Wales.

Happily Ever After by Catherine M. Roach

and Love Between the Covers

So in 2012 (or was it 2013) I went in on the Kickstarter for Laurie Kahn’s documentary Love Between the Covers. Earlier in the month the documentary was shown at the State Library of New South Wales on a Saturday afternoon to a dismally small crowd (and a big shout out to Ainslie Paton for giving me a heads up that it was on – I saw ZERO publicity for this event). The event was launched by Catherine M. Roach from Alabama University, aca-fan scholar, romance writer and author of Happily Ever After which I read cover to cover in the space of a week. I am hoping to have a follow up post on both the book and the documentary so for now, all I can say, is that though my research thesis is predominantly based on library practices and metadata, it is also interdisciplinary and the romance scholarship aspect is a huge driver for me. I do consider myself to also be a romance scholar but, oh my goodness, I really don’t feel worthy in light of both these excellent defences of romance fiction and readers.

I own my own copy of Happily Ever After  (purchased from an online book retailer) but I didn’t get Catherine M. Roach to sign it because is autographing a scholarly books something that scholars do? Probably. I missed my chance!

I also own a copy of Love Between the Covers because I went in on the Kickstarter!

Yeah. Well. I am not a fan at all of revenge plots and marry/sleep with me coercion plots. They creep me out. The big grand grovel has to be like ultra big and kapow for me to be satisfied. In this book, Gabriel Mantegna kidnaps Elena Ricci and forces her to marry him otherwise he will bring her family down down down to the gutter he believes they belong in as they had him framed and incarcerated for two years for crimes he did not commit. Though their enemies to friends story was beautifully developed, I was still left with doubt that this was a marriage that could succeed in the long haul. In my opinion, Gabriel stooped too low when he forced Elena to marry him and though he seemed kinda okay, Elena deserves much much better in her life than both the arsehole father and brothers she was dealt with but also to have had marriage forced upon her. Gabriel’s pride in the end, turned him into a small, vengeful man and you can never fully come back from that. But then again, Elena will always have that power to hold over him and dammit – isn’t that what romance fiction reallllly is about!

I bought my copy of this book from a department store.

Other Books this month:

I’ve already blogged about excruciating Betty Neels and the bingo square “Would you like a cuppa tea, Love!” and “Gaslight” as well as the embarrassing “Vassiliki is a Vamp” which certainly gets the “!” square.

Suddenly: I read Sarah Mayberry’s Suddenly You. Self explanatory. I enjoyed this book on a hero who is having to deal with falling in love with his best friend’s ex-girlfriend – this is especially hard when your best friend is not meeting his obligations to the child he has with the ex-girlfriend. Highly rec!

The copy of this book was in the deselection pulping pile at my workplace library. It now sits with all my other Sarah Mayberry novels.

Roam: I also have been reading travel books on Canada and the New England region of the USA. Lonely Planets, Fodors and train travelling tomes. I am also scouring google maps, Tripadvisor and lots of travel sites (especially fares for destinations). I am considering going to a readers Meet Up next year and it would be my first ever visit to Canada and the USA (3 days in Los Angeles in 1993 does not = “I’ve been to the USA”). I have a bucket list that needs ticking off!

I borrowed all the books that I have been reading to create my bucket list.